Tigers Too Strong for a Competitive Gungahlin.

A tremendous opening day of the 2019 AFL Canberra Season at Allinsure Park, with the Tigers wining all four grades last Sunday. A strong crowd attended in perfect conditions

Gungahlin Jets proved quality opposition in all grades – although being well beaten in the Men’s Reserve Grade fixture and Ladies 1st Grade match.

The Tigers very youthful Rising Stars team commenced the day. They were coming off an 84 point loss to Marist and were eager to make amends for their opening game on home turf.

Both teams were missing players with several Gungahlin players being elevated into their first grade for the day – the Tigers missing a few with GIANTS duties over the weekend.  Fortunately, the Tigers regained a number of players who were unavailable for the opening round and they proved worthy acquisitions – leading the way for a quality win.  New captain Jack Manners played strongly up forward with 4 quality goals.

The Tigers now play Ainslie in a catch-up game – (the opening round being washed out a few weeks back). This game is scheduled to be played at 6.15pm on Wednesday 17 May at Allinsure Park.   It is a replay of last years Grand Final in name only as both teams will have had many players elevated from their respective 2018 teams over the summer months.

The second game of the day featured the Tigers Reserve Grade.

Gungahlin Jets have struggled in recent years to field teams in this grade but were worthy opponents on Sunday even though the scores may not indicate their competitiveness.  They never stopped “having a go” against last year’s Grand Finalist.

The Tigers fielded three new players to the Club in Nic Lawlis, Ryan Worn and Jayden Cutts, the latter kicking 8 goals on debut. 6 players in the team graduated from the 2018 Under 18 Grade team. Unfortunately, the Tigers lost Captain Elie Maatouk and Coach Alex Lawder with serious leg injuries during the game. 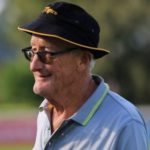 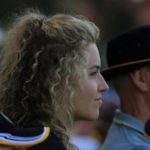 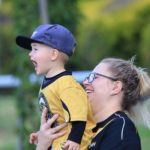 The score line of this game indicates a comfortable victory for the Tigers, but it certainly wasn’t. The Jets provided quality opposition throughout and were well in the contest until midway through the third quarter when the home team started to draw away.  The Jets are certain to provide a few upsets during the year.

The Tigers featured just two new players with Campbell Lovell and Lachie Highfield receiving their jumpers prior to the game from Captain Josh Bryce who didn’t play due to a work-related injury.  The balance of the team provided the experience required to take the Tigers to a win in the opening game of the season.  Stand in Captain Tyler Collins led the side admirably supported by assistant coach – the ever-reliable Toby Conroy.   Up forward Tim Clowry and Matt Grocott were both effective in their roles.

The Tigerettes overwhelmed their opponents in the opening term with a five-goal burst that set the scene for the remainder of the match. The Tigerettes had far too much talent around the ground for their inexperienced opponents. Unfortunately, the Jets have lost quite a number of players over the off season to opposition clubs.

Jackie Parry was outstanding for the Tigers posting 11 goals in her first game at the club. Youngsters Ellen Squire and Olivia Grace Straker both played well in their initial first 1st Grade game appearances for the Tigers.

Another Stapleton to join the Tigers in 2021

2021 Recruitment starts with a bang!